When Danni Mitchell was preparing for her wedding this year, she began looking for a space she could get creative in. She didn’t want to feel trapped by wedding spaces that were confined by what was already there. That might seem a bit out-of-the-box for most people who would like to avoid adding more work to preparing for their wedding day, but not to this graphic designer. So, she found a warehouse. Yes, this bride-to-be thought a warehouse would be the best place for her wedding.

“A warehouse is a beautiful blank canvass to do what you want,” said Mitchell, who was married there this past summer. After spending some time in Brooklyn, she likes the industrial vibe of the space she found. She came across her future wedding space while doing work as a graphic designer for one of her clients, the Warehouse District, a transformational industrial area in West Palm Beach, Florida that is starting to attract artists and entrepreneurs to build their creative projects alongside older, industrial-style businesses and warehouses that have been there for decades.

As she started creating ideas for her wedding in the Warehouse District, she and her best friend and colleague Danielle Casey began forming an idea to turn the space into a business. In January 2017, more than six months before the wedding, they turned that space into Elizabeth Avenue Station, which has became a space for artists and vendors to showcase their work. Retail items include pottery, fine art, records, jewelry, and clothing. They currently house 20 vendors in an open floor plan in a 3300 square foot warehouse.

At any given hour of any given day, most of the vendors are not present, but that’s where Danni, Danielle, and their team at Elizabeth Avenue Station come in. They handle any transactions the customers want to make. This allows those vendors, who have other responsibilities such as jobs and families, to not have to be there at every moment. Without Elizabeth Avenue Station, many of these vendors simply sold their products through e-commerce sites online. This allows them to continue to do that, but also hav a place to showcase their work product.

However, most of the vendors and artists are present when Elizabeth Avenue Station hosts events. They do multiple events per month, but their one “big event” each month includes pop-up retailers (in addition to the 20 inside) who set up outside, along with live music and food vendors.  On November 18, 2017, they held their first Station Music Festival, which included five live acts played throughout the late afternoon and evening. In addition, every other Thursday features an open-mic night as well as free sunset yoga sessions, which they hope to soon do every Thursday starting in 2018.

One commentator who heard their story called them “accidental entrepreneurs” in the sense that they didn’t first envision the place as a business. It just sort of came to them as they were pursuing their passion through other ways, including their joint Gather and Seek graphic design business. Now they have established a gathering place for creatives and their customers.

“We are all creative in different ways,” said Danielle Casey. “There is the person who actually hand makes ceramic pieces, and then there’s the person that actually curates the right pieces that maybe they didn’t have the eye to make, but they had the eye to curate it.”

“The culture that appreciates the creativity – I think that’s what we’re trying to attract,” adds Danni Mitchell. “A lot of our consumers have a creative mindset … they want to be involved in the atmosphere and the magic that happens here … the common thread is creativity and community.”

While Elizabeth Avenue Station is a little bit off the beaten path in an industrial area now known as the Warehouse District, there is a vibrancy to the place that is part of a renewing this area and turning it into a place of beauty. The creativeness of Danni Mitchell and Danielle Casey are certainly making this warehouse more than a beautiful blank canvass. It’s now full and alive and bringing more people into a part of town that may have otherwise been overlooked. Creativity and community: it’s a beautiful thing that these “accidental entrepreneurs” have established at Elizabeth Avenue Station. 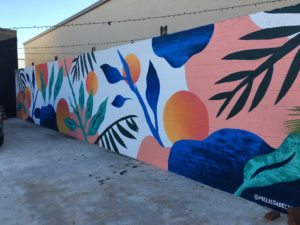