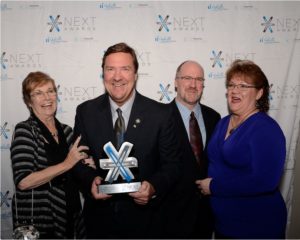 After attending the University of Oregon (he didn’t finish — and is now back earning a degree at Lipscomb University in Nashville), Mark started his own satellite communications and services business – putting satellite dishes in people’s backyards. While continuing in that effort, only three years later, he started a software development company, managing these two companies at the same time. He later sold them both and went on to his next venture.

Mark was recruited to Nashville to become President of a company that does business process outsourcing for America’s largest fleets (mostly trucking companies)  – billing, payroll processing, invoicing, turning compliance documents into digitized images, and then expediting that information back out to the fleets in the most efficient way possible; after five years of doing this, he sold that business with some of his partners. It was eventually bought by Xerox, who still operates it today.

In January 2007, he started a company called Switfwick, which includes a very focused effort on manufacturing in the United States. “I believed after five or six years of outsourcing – and being in that business – that I needed to see if I could enter the manufacturing sector, and use all my skills, and challenge my experiences, to construct and build something in the United States that was world-class; and that became Swiftwick socks.”  This brand includes medical compression socks, which improves circulation, prevents blood clots, and is now used by many professional athletes. He retired from being CEO in 2014, but today he is still an investor-owner of Swiftwick.

“I like the idea of starting companies and building companies and I have about a seven-year clock,” said Cleveland.  “For all of your listeners who think entrepreneurship and success happens overnight, it’s absolutely true. It just takes about five years to get there overnight.”

“I bought the company with an appreciation that we were sharing the Hobby Lobby brand name,” he said. “For a long time both companies could say we weren’t interfering with one another.” Mark Cleveland’s Hobby Lobby had the first use and the first trademark. Over time, as the other Hobby Lobby brand continued to grow, and expand out of Oklahoma, across the country, and with 19 stores in Tennessee, there started to become brand confusion, especially when social and economic topics consumed Hobby Lobby’s public images, including a lawsuit against the federal government over compliance with certain facets of the Affordable Care Act.

Cleveland decided to sell the Hobby Lobby brand name and trademark to the other Hobby Lobby and turned his company’s name into Hobby Express, of which he maintains ownership and is still active with. “I have a tough time selling things that I’ve invested this much of my energy into.”

Recently, Cleveland launched a new company called Hytch. It is an app that pairs people going in the same direction. Whenever you carpool or use public transportation, you get points. Those points eventually turn into cash. Essentially, Hytch pays users for sharing a ride.

“We are defending clean air and defeating traffic using technology that’s available today – and incentives, in order to try to get more people to share the ride.”

He believes companies and governments should be involved in rewarding people for sharing a ride since it directly reduces traffic congestion and carbon emissions and keeps the air cleaner. Hytch is a way they can track that use. Hytch pays its users for sharing rides. The app just launched and it can be downloaded on any smart phone device or by going to Hytch.me. And it’s already receiving awards, including the 2016 Nashville Area Metropolitan Planning Organization Innovation Award

Another current project Mark is involved with is the building of a hotel in downtown Nashville. It is called the Stanza Hotel, a 100-bed hotel, with no parking spaces – you’ll be required to park elsewhere or use a shared ride service like Uber or Lyft.

“It’s going to be an exciting piece of architecture,” claims Cleveland. He will be marketing the hotel to be leased floor-by-floor. “I’m trying to provide the lowest cost group experience within walking distance of downtown Nashville.”

“Sometimes the constraints of what you’re looking at are what drive your thinking process into: what can I do that’s 12 stories tall; I can’t park a single car on the property because I’m consuming the entire property by building something on it.” And since consumers can’t park a vehicle there, “it’s got to be a temporary use” type of facility.

“Stanza is a line of poetry, a line of music. We have a 12-story hotel. There’s 12 notes in the musical scale,” said Cleveland. “It’s come together very nicely as a brand. Wherever you see music as the base of a community’s culture – maybe it’s Memphis or New Orleans or Austin – you’ll see a Stanza Hotel.” They plan to start construction on the first Stanza Hotel in Nashville at the the beginning of 2018.

Mark Cleveland’s Advice to Other Entrepreneurs:

Due to his entrepreneurial experiences thus far, Mark Cleveland was able to offer listeners of the Agents of Innovation podcast some advisement from things he’s learned along the way:

“Relationships are lifetime assets: you have to give, you got to help the next generation, the student, the entrepreneur that’s trying to get a foot in. Try to create a part of the ecosystem that you’re involved in.

“Education is super important: I’ve committed myself to be a life-long learner.”

“I try not to succumb to fear. I think that bravery in pursuit of mission is really important. It’s really easy for people to talk you out of a line of thinking because they have a safer perspective or they represent the bulk of the thinking.”

“We are kind of walking around as a society in a daze and some people – entrepreneurs, political leaders, people of faith – have to stand up and decide to change their behavior.”

“Sticking with your mission and being brave to be different – following the motivation that inspired you in the first place.”

“We entrepreneurs have to encourage each other and come together as a culture and a community to just keep on thinking outside the box and doing things differently.”

“You have to stay on top of technology in every business.”

“Listening to your customer is probably the most important skill you got to have.”

To learn more about Mark or follow his current projects, visit: MarkACleveland.com. But first, be sure to tune into Episode 31 of the Agents of Innovation podcast, which you can find on iTunes, Stitcher, or Soundcloud. Then, be sure to leave comments below or on the Agents of Innovation Facebook or Twitter pages. And follow the posts on Instagram!

Jason Harle grew up on a farm in Iowa – while farming isn’t actually the norm for most Iowans, he certainly fits […]