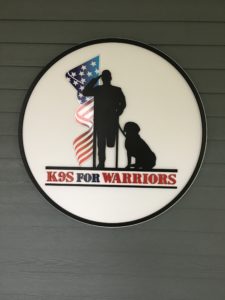 Our nation’s veterans are made up of individuals of all walks of life, but they are a special group of people. They put their lives on the line to protect our freedoms. As we celebrate Veterans Day this month, Episode 33 of the Agents of Innovation podcast pays tribute to our veterans by featuring an interview with Rory Diamond, CEO of K9s For Warriors.

K9s For Warriors is the nation’s largest provider of service dogs to military veterans suffering from Post-traumatic Stress Disability (PTSD), traumatic brain injury and/or military sexual trauma as a result of military service post-9/11. The organization was founded in 2011 by Shari Duval. Her son had faced difficulty readjusting to society after two tours in Iraq. However, she noticed a difference in him after he obtained a service dog. She decided to start helping find service dogs for other veterans which led to the formation of K9s For Warriors.

Rory Diamond came on as CEO just three years ago. He has been a litagator for two international law firms, a federal prosector for the U.S. Department of Justice, and has served in the administration of California Governor Arnold Schwarzenegger and in the White House under President George W. Bush. While at the McGuireWoods law firm in Jacksonville, he took on K9s for Warriors as a pro bono client. Then, one day just over three years ago, K9s For Warriors asked him if he would consider coming on as their CEO. “It took me about a half a second to say yes,” Diamond recalls.

While a practicing lawyer, Rory was new to managing staff. Three years ago, he was one of 16 employees when he joined K9s For Warriors as their CEO. Today, the organization has 81 employees and has helped over 331 veterans from 44 states and 216 cities. They’ve also rescued more than 600 dogs.

“In an ideal world, K9s For Warriors wouldn’t exist,” said Diamond. “Our warriors are going and serving multiple tours in Iraq and Afghanistan and they’re coming back and they are not integrating very well,” he says. “PTSD is real, and for the warriors we serve, it is debilitating.”

Rory points out that every day, more than 20 veterans commit suicide and PTSD is a huge driver of that. “The Department of Veterans Affairs has 3 solutions for our PTSD crisis: it’s pills, pills, and more pills,” said Diamond. While that may work for some, it doesn’t work for most. That’s where the service dogs come in.

“There’s something magical about a dog and how they can get a warrior back out into the world again,” says Diamond. 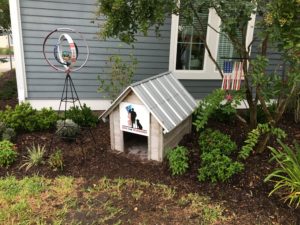 The majority of dogs K9s for Warriors uses are rescue dogs. They are typically more mellow, non-reactive to loud noises, and not food-aggressive. They also share something with the warrior they are paired with: both have experienced trauma. “They talk to each other about it,” says Diamond.

K9s for Warriors used to have a waiting list of 22 months. Thanks to the doubling of their facilities over the past year, today that waiting list is down to one year and they are constantly working to find more dogs, open more facilities, and assist other people and organizations who want to help veterans so that more are treated quicker. The K9s For Warriors headquarters in Ponte Vedra, Florida can house 12 veterans at a time, who then live on-site for three weeks. On the second day, they get their dog. As Rory explains it: “It’s a magical moment.”

During the next three weeks, the warrior and the dog go through training together. They go to restaurants, stores, and the beach. Their final test: they visit Costco, the Jacksonville Zoo, and St. Augustine. Once they pass certification, the warriors return back to their homes across the country to live with their dogs. Considering the lifespan of a dog, K9s For Warriors guarantees these warriors a dog for life. Some may go through as many as four or five dogs, but most just want one. It’s that bond between the warrior and the dog that changes things for both of them, and reduces the symptoms of PTSD for the warrior.

On Episode 33 of the Agents of Innovation podcast, Rory references a study that has come out since we sat down for the interview (in July). One of the scientific findings this study found is that the cortisol levels in the brain return to normal for the warriors with dogs. As Diamond claims, this is “proof service dogs can change the physiology of the brain for someone with PTSD.”

Compared to the behemoth of the Department of Veterans of Affairs, K9s For Warriors is a nonprofit organization that has limited resources and to-date has only accepted funding from individuals, private foundations, and corporate sponsorships. Yet, it is proving to be engaging in a successful experiment that is changing the way we treat our nation’s veterans and some in the halls of Congress are taking notice. John Morris has been a frequent traveler throughout his life. In 2012, he was involved in a horrific car accident. Driving across […]