While a student at New College of Florida, Michael Long developed a passion for sailing. He later channeled that passion into developing a nonprofit organization called SailFuture. As a direct alternative to incarceration, SailFuture works with prosecutors, public defenders, and judges to identify youth at risk of being incarcerated and to determine if they are fit for this program. If they are, SailFuture works with the presiding judge to create a placement and accountability agreement that commits the youth to the SailFuture program in lieu of incarceration.

As SailFuture has evolved over the past few years, they now specifically work with “crossover youth,” meaning youth who have involvement with both Florida’s child welfare system and juvenile justice system. These two systems are often at odds with one another. While the child welfare (foster care) system is intended to protect those harmed by society, the juvenile justice system is designed to punish those who have harmed society. These “crossover youth” are mostly foster kids who have committed offenses. According to Michael Long, however, many times, these troubled youth break the law as a coping mechanism to their problems.

“These kids don’t need to be locked up, but they do need to be held accountable,” said Long. And that’s where SailFuture comes in.

SailFuture is innovative in that it uses sailing as a rehabilitative means for at-risk youth. They learn to build trust, form relationships, realize we are dependent on one another, and ultimately, they break down barriers. By going out on the water, they “learn by doing.”

“Sailing is a therapeutic environment in general – the sea has always been a calming place for many people,” said Long. At the same time, he say that “sailing is also a way to create stress.” When the young men on the boat encounter challenging situations together while out on the water, they quickly find out that everyone on board is dependent on one another. 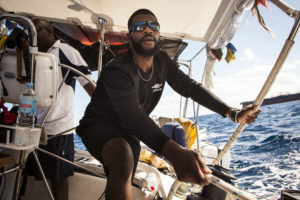 Michael Long may also be uniquely suited to lead this enterprise. Despite the fact he has been so successful by such a young age – he was the captain of his sailing team and student body president at New College of Florida, he served on Florida’s Board of Governors, representing all college students in Florida’s public colleges and university, and he was awarded the prestigious Truman Scholarship – Michael Long had a troubled past as a youth as well. As he told us on the Agents of Innovation podcast, “I was a hell-raiser as a kid. I’m a hell-raiser now.”

SailFuture first started their programs by pairing up college students at New College of Florida as mentors and co-captains with an at-risk local high school youth in the Sarasota, Florida area. In late 2014, they were given an opportunity to expand the program when they received a generous donation of a 65-foot MacGregor sailboat. The vessel was docked in the nation of Turkey, so SailFuture came up with the idea of doing a fundraiser by offering 15 one-week long vacations in the Mediterranean for roughly about 12 people each week in the summer of 2015. They sailed through Turkey, Greece, Italy, Croatia, Spain, Morocco, and the Canary Islands. Finally, over 22 days, they sailed the boat across the Atlantic Ocean to the Virgin Islands, where they offered an additional 13 weeks worth of vacation opportunities in the spring of 2016, before bringing the boat “home” to Florida. 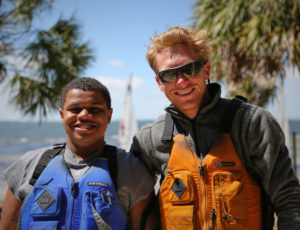 “Everyone should do a long-term sailing journey,” said Long. “It really gives you an enormous amount of time to really reflect on where you’re at in life and what matters and who matters.”

SailFuture recently acquired a waterfront home in St. Petersburg, Florida. As a licensed child welfare agency with the state of Florida, SailFuture houses six young men and performs the functions of a high school, counseling, job training, and 24/7 housing for two years. Long, who is only 25 years old, describes himself as “a glorified dad more than anything.”

For more on what SailFuture is doing with the six young men it is housing for a two-year program, listen in to Episode 29 of the Agents of the Innovation podcast on iTunes, Stitcher, or Soundcloud. Then, be sure to leave comments below or on the Agents of Innovation Facebook or Twitter pages. And follow the posts on Instagram!