Meet Jimmy and Tommy and their cousin Galen — otherwise known as The Currys. Three Florida dudes inspired by folk, rock, funk, and roots music. They never did figure out a name for their band, so people kept referring to them by their shared family name: The Currys. It stuck. They joined us on Episode 21 of the Agents of Innovation podcast – in the morning after they played a house show in Orlando. We didn’t make them sing again on the podcast, but they were surprisingly full of energy as they shared their story.

They come from a large Catholic family. “There are lots of Currys,” as they say. Over the years, the guys would come together at large family gatherings and play music. But it wasn’t until all three were out of college, and had experimented with some different career trajectories for a few years, that they finally formed a band together. 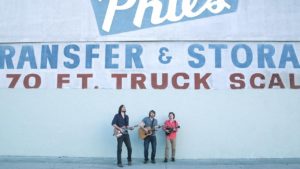 While they are from the beach town of Port St. Joe in the Florida panhandle, cousins Galen and Jimmy had both gone to the College of William & Mary, where each of them were in separate funk bands. After college, Galen moved to Charlottesville, the “coolest, artsy town close to Williamsburg” and put out a solo record. Then he moved to Austin and produced a second solo album. Meanwhile, Jimmy had moved to Park City, Utah to become a ski instructor. “I wasn’t a very good ski instructor,” he admits. Tommy had moved to L.A. as a tutor while he engaged in music on the side. From there, he moved to Connecticut and became a high school math teacher. Finally, Galen moved back to Charlottesville and encouraged his cousins to join him. They did — and in January 2013, The Currys were formed.

One of their first experiences as a band was playing on tour in Ireland. They have since traveled all over the USA. They spend a lot of time together — the three of them and their Dodge Caravan; and they have gotten to know each other very well. As if traveling around the United States wasn’t enough, over the past year and a half they also have taken some excursions abroad. As part of a group of 16 family members, they traveled to Spain in the summer of 2015 and walked “The Camino,” the ancient pilgrimage that follows “the Way” of St. James. Later that year, one of their fan/friends brought them to Iceland to see the Northern Lights, play some shows, and attend a music festival. And next May, they have been hired by another fan/friend to play a wedding in London. When they’re not traveling for music or for fun, they use their “down time” to write music.

Earlier this year they released their second album, West of Here. While the first album was more of a collection of songs they wrote, the second album is a little more thematic. As bassist Galen Curry said, this album is “about home and trying to figure out where home is and what it means to you.”

Tommy Curry added even more depth to this theme: “I think it comes largely out of the fact that … we were creative people and business people… wrapped into one. We also spend almost all of our time traveling so there’s this idea of having this routine, having a home base,” he said. “Your concept of home changes as you go from high school to college to after college. I think trying to grapple with this idea of moving around as a young person, finding different jobs, and where am I going to call home base.”

According to Tommy, the album West of Here “captured the idea of this romanticized future home that is some place other than where you are and also this idea that you might be missing some of the good things about where you are by just looking to the West, by just looking someplace else — like the grass is always greener concept is appealing, but also flawed.” 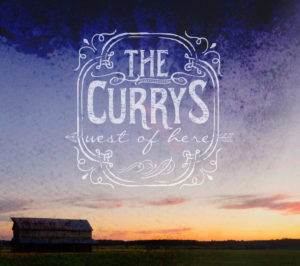 The Currys have been regulars at the Rock by the Sea charity music festival the past few years and recently won a competition to play on The Rock Boat (a floating music festival with 3,000 fans) that will depart out of Tampa February 10-15, 2017 on the Norwegian Jade. They play everywhere from music festivals, to small venues, to house shows, and now will join the growing family of Rock Boat artists and fans. Their star is on the rise and their journey from the shores of Florida will certainly continue somewhere West of Here. Josh Jenkins joined us on Episode 66 of the Agents of Innovation podcast. He is the lead singer of Green River Ordinance […]