On the fourth episode of my podcast, Agents of Innovation, my guest was Dan Lesniak, founder of Orange Line Living. In a nutshell, Orange Line Living has become the number one real estate selling team in Arlington, Virginia, selling twice as much as any other real estate agent or team in 2014. In addition, they are now the second best selling real estate team in the Commonwealth of Virginia.

But less than five years ago, Dan wasn’t even involved in real estate. A native of South Florida, Dan graduated from the United States Naval Academy in Annapolis, Maryland. While completing his time there, he also added an M.A. in History from the University of Maryland. From there, he served as a Nuclear submarine officer based out of Charleston, SC and King’s Bay, GA (just north of Jacksonville, FL). After his time in the U.S. Navy, he worked as a defense contractor while simultaneously earning an MBA from Georgetown University. 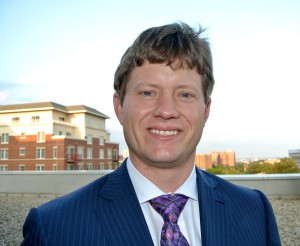 If there’s one constant I’ve seen from Dan over the past fifteen years, he doesn’t seem to do just one thing. As he says on the podcast, he always seems to be “looking for the next thing to do in life or in business.”

In the midst of his real estate career, he met his wife Keri Shull. In fact, she was originally a competitor in the same market and yet they found a way to team up in both life and business. In just two months from now Dan and Keri will be welcoming their first child, which should certainly present a new dynamic to their life and business together.

On the podcast, Dan discusses the “myth of risk” in leaving his comfortable job as a defense contractor to become a real estate entrepreneur. The real risk, he says, would have been the missed opportunity had he not taken on the new adventure. He also discusses how he broke into the DC marketplace to become the best real estate selling team in Arlington, Virginia. He started small: selling apartments in the building he was living in, to selling ones across the street, to taking on the entire “Orange Line” area. (For those not familiar with the DC area, the “Orange Line” refers to a particular route on the DC metro subway map).

Dan describes his entrepreneurial action as “very lightning focused.” Today, he and his wife have 32 employees, but he still finds the time to train for marathons. He recently completed his eleventh lifetime marathon and is preparing for his twelfth.

Dan appears to be amazingly productive. How does he find time to do all this with his life and business?

“If something’s important to you, you can always find the time. There’s always ways to find time,” says Lesniak. “You just have to decide there’s certain things you’re going to do and find the time to do it.”

One example: on some mornings he sets his alarm to wake up at 5:30am, meditates for 10 minutes, and then runs for an hour to an hour and a half. And he does all this without checking his email before 7:30 or 8am. “At that point, you’re giving up control,” he says. “Rather than do that [check email], I try to dedicate the first hour or two of the morning with mental and physical exercise and just go from there.”

Dan Lesniak has certainly found the time to dominate the Orange Line. I wish him and his wife Keri all the best as they expect their first child later this summer. And I encourage you to listen to what he has to say on the Agents of Innovation podcast.

Dr. Tom Fame’s Haitian Journey. Dr. Tom Fame is a physician in Salem, Virginia. He has made over 50 trips to Haiti […]