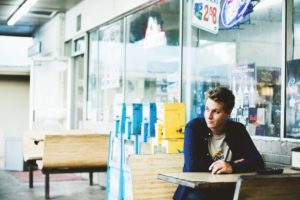 On Episode 20 of the Agents of Innovation podcast, we sat down with 21-year-old musician, Houston Keen, of Chiefland, Florida. He joined us live in person to record an interview and performed two songs live on the podcast.

Houston first picked up a guitar at the age of 11, took some guitar lessons, and began performing live at the age of 17. His earliest gigs were mostly in the bar scene in Gainesville, where he still plays many of his local gigs. However, today he tours all over Florida, with regular stops in St. Augustine, Cedar Key, and Tampa. He has also toured out of state, including in the Carolinas and Texas, where he has plans to move — to Austin, specifically, to tap into the live music scene. 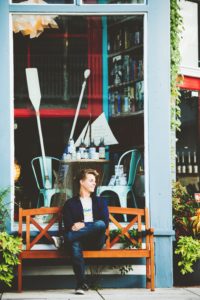 Houston uses Facebook, Twitter, Instagram, Snapchat and Soundcloud to promote his music. “I am a social media maniac,” he said. But he also gets out there and meets people in person. He is all about the personal connection. Someone might first get to know him through social media, come to one of his shows, and connect with him in person.

“There’s this term I use, it’s called friction — and friction is the difficulty it is between making a connection due to money, due to location, whatever it is.” But thanks to the golden age of the internet, an era in which he was born into, he can create connections and build upon them. “Being young, I can blend into whatever the social media angst is.”

His philosophy is simple: “All you have to do is go individually, person to person, and start making connections. Make friendships, give them music, give them stickers. Just make sure you two remain friends … I don’t even count fans. I don’t say ‘fans.’ When I meet somebody that I’ve never even met and they are like, ‘Hey I know you from Instagram or I know you from Twitter and I came out to a show,’  I don’t count it as a fan, I’m like, ‘You’re a friend now. We know each other on a first name basis.’ I’m not going to charge my friends’ money … I just want to give love and have love back.” 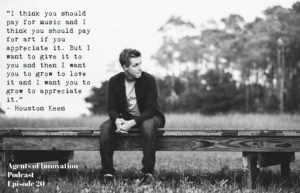 At the age of 19, Matthew Fowler put out his first album, “Beginning.” This was a compilation of songs he wrote starting […]

One thought on “Houston Keen Now Streaming For You”