Jason Harle grew up on a farm in Iowa – while farming isn’t actually the norm for most Iowans, he certainly fits “the Iowa stereotype.” He participated in many sports throughout his life and between farming and athletics, Jason built his body in the process. While he didn’t play college sports, he continued to hang around athletes and kept his fitness up to par by working at the recreation center at Iowa State University for four years.

Following college, he went into a “normal” career path, but he didn’t like “the cubicle life,” so he decided to attend graduate school at Drake University in Iowa, earning his Master’s degree, while working as a volunteer strength and conditioning trainer for various sports teams at Drake. He then worked at a couple of small colleges in Iowa, teaching business courses (including sports management) as an instructor, while also dabbling as a “CrossFit” trainer. He continues to teach for one of those colleges as a virtual instructor. 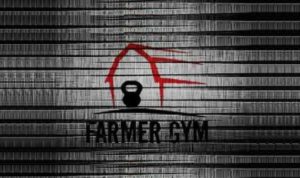 After meeting the woman who would become his wife, he moved out to Los Angeles with her and worked in the UCLA athletic department, training and mentoring some of their top college athletes (a few of which are now in the NFL).

While in L.A., Jason also started “Farmer Gym,” which incorporates lifting weights and cross-fit-like training with the idea of being in an outdoor environment like a farmer. This is how they came up with the name “Farmer Gym” (a play off of “Farmer Jim”). His slogan: “Your environment is your gym. Your body is the machine.” This “farm boy” from Iowa was building a business as a personal trainer, with a number of clients all over L.A., including at million-dollar houses in Beverly Hills.

Jason and his wife, who practices law, then moved back to her home town of Tallahassee, Florida. They bought two acres of land, where they live, and also created an outdoor recreation environment, where Jason’s clients are training outside. His vision is to build a barn (he asked us to picture “Rocky” training in the barn like in the film Rocky 4) with gym equipment inside the barn. In addition to training clients at the two acres on his property, he also continues to work as a trainer at Premier Health & Fitness – a big box gym – in Tallahassee. While Jason had to find new clients in Tallahassee, he also still kept a few of his clients in L.A. who he continues to train virtually. In addition, he markets his gym and provides personal training routines on his website, his Facebook page, and on his YouTube channel. He says using these online mediums provides a sense of engagement with current and possible future clients and customers. He does both individual and group training, spending about half his time at Premier, and the other half of his time on “the farm.” That is, when he’s not writing his books.

His routines are high-intensity, functional-based movements. While he deviates slightly from the official “CrossFit” training, he respects what they do and has even attended the Cross Fit Games in southern California.

Jason has published several books and training manuals, which are available on his website. His latest book, Farmer Gym’s Strength and Conditioning Manual is a 10-week program designed to improve one’s strength and overall fitness level to give you an athletic look. He cautions that it’s not for beginners, but it’s also not for massive body builders.

“I think being an entrepreneur – if you have that working-class mentality, if you have that drive to put in the extra hours when other people are taking a nap or sitting on the couch or watching whatever TV show they want to watch – if you have that gene in you that wants to work a little bit harder, you can get that business off the ground, running it to a point where you’re happy, your family is happy, and hopefully it’s paying dividends to generations down the road.”

He doesn’t believe he’s to that point yet, but he advises to “stay diligent, don’t quit, work your butt off. That simple. Just keep grinding because that’s what it’s all about.”

We were privileged to have Jason tell us his story on Episode 24 of the Agents of Innovation podcast and we have confidence that as Jason helps others reach their goals to be as fit as a farmer, his own entrepreneurial results will continue to thrive as well.