Nick Gill is a man of many places but also many talents. He was born in Washington, DC, raised in Fairhope, Alabama, and is currently living in Nashville, Tennessee. After high school, he didn’t take the usual route to college. Instead, he pursued his talents as a musician and went to Nashville.

He went down Nashville’s famous “Music Row” and gave his music to as many people as possible. Between 2006 and 20012, he released five albums. His latest, Waves Are Only Water, scored him some notoriety and many gigs across the South.

He then decided it was time to get back to school. He moved to Auburn and attended community college before moving back to Nashville to pursue degrees in business and marketing at Lipscomb University. He graduated this past May and is now keeping his options open while he keeps his dreams alive.

In addition to writing and playing music, Nick has also dabbled in acting and music production for other emerging artists. In fact, today he is putting more of his time and energy into those pursuits.

On the acting side, Nick has been an extra in big films like Hunger Games: Mocking Jay Part 2. “I love being a small part in a big film,” says Gill. He has also appeared in television commercials and had some lines in television shows, including a recent gig he had on the show Nashville.

He typically does a lot of self-recording auditions, where he records an audition at home and sends it on to casting agencies or film companies. He has a booking agent that helps him identify potential roles. If a few bigger ones were to come through, a move to Los Angeles, or even Atlanta, to pursue an acting career, is something he is also considering.

With today’s technology making music production more accessible for the average person, Nick also uses that opportunity – in his house – to work with other artists. “I love the avenue that music production has opened up for me. I can work on other people’s projects,” said Gill. “I love being… the support system. The spotlight is fine, but I just like exploring within Logic, getting to discover new sounds, and making samples. It’s just really interesting to me.”

Of course, the music and acting industry aren’t easy arenas to make it in. Sometimes you just got to pay the rent. He has picked up jobs waiting tables at restaurants and he is currently taking real estate courses. His dad has been in the real estate industry in DC for a long time and it’s an option he is considering if the music and acting don’t deliver enough food on the table. “The main thing is trying to find a flexible job so that I can also pursue my creative passions as well,” said Gill. 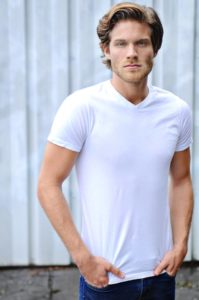 On Episode 32 of the Agents of Innovation podcast, Nick allowed us to play his song, “When I Worship You.” While most of his music is not worship music or even “Christian music,” he said that he just writes what he feels. “Whatever comes out, comes out, as far as singing or writing. I’m a Christian. If I have something on my mind or something that I feel needs to be expressed, it’s going to come out,” said Gill. “I don’t like to be put in a box. I just like to write and if I like the song, I’ll put it out.”

To learn more about Nick or follow his current projects, visit: nickgillmusic.com or check out his acting roles on IMDB.com. But first, be sure to tune into Episode 32 of the Agents of Innovation podcast, which you can find on iTunes, Stitcher, or Soundcloud. Then, be sure to leave comments below or on the Agents of Innovation Facebook or Twitter pages. And follow the posts on Instagram!

On the third episode of the Agents of Innovation podcast, my guest was Steve Everett, a musician who lives in Nashville, Tennessee. […] On Episode 15 of the Agents of Innovation podcast, we were joined by the Radio Birds, a Rock and Roll band that […]