“I like people that appreciate music,” says Paul Pfau.  Earlier this year, Pfau gained increased fame and recognition after appearing on Season 8 of NBC’s “The Voice” and that took up quite a bit of our conversation on Episode 6 of the Agents of Innovation podcast.

Pfau taught himself to play the guitar at age 14, but singing has been more of a challenge. “The one thing I feel the least comfortable with is my voice,” said Pfau. “I feel like it’s a lot easier to teach yourself to play guitar than sing because you can play the guitar all different sorts of ways and you’re not going to permanently damage your arms or your hands. But if you sing the wrong way … you can damage your vocal chords and that’s what I was doing.”

In fact, the damage he did back in 2013 developed a nodule in his throat. He had to take about six months off singing and during that time (when he wasn’t recovering from surgery) he mostly stuck to playing guitar and filling in for other bands, including with his friends in the band, Melodime.

More than three years ago, Pfau went to one of the “cattle call” auditions for The Voice, but was not invited to the show (thousands of people show up to these things in each city and it’s nearly impossible). But in the summer of 2014, he received a random, unsolicited call back, which led to him being invited to a private audition. From there, he was invited to Los Angeles, where he auditioned for the producers of the show. Of the 108 people that were invited to take part in the blind auditions for the judges of The Voice, Pfau was one of only 48 to make it through. That blind audition appeared on prime time television and gained Pfau many new followers. 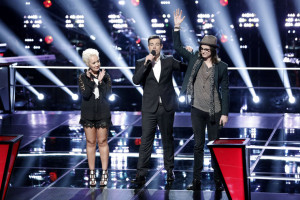 Pfau ended up losing his next battle – to the eventual winner of the show, 15-year old Sawyer Fredericks. But Pfau has kept a positive attitude about the whole experience. “I didn’t ask for any of this so the fact that I even got a piece of it is awesome and it’s helped out tremendously.”

“There are people who have gotten further than me that aren’t doing anything – and not just from this season [of The Voice],” said Pfau. “I think a lot of the people think that this is just going to be the ticket and they’re not going to have to do anything after this, but the truth is it requires much more work after it’s done and then you’re like alright now I have to stay at this level.”

Pfau has seen an increase in fans showing up to many of his gigs as he tours all over the country. He also recently moved to Nashville, a place he’s been trying to move to for the past five years. He’s spending his days and nights writing and producing music, as he is working on a new album.

Pfau says he loves “being in an area where everyone is at the top of their game.” For the music industry, Nashville is that place. “It challenges you to get better. It makes you work harder. I just feel like my work ethic has totally changed since I got here,” said Pfau. “Now that I’m here, I am just taking all that energy. I’m just trying to get better everyday.”

His advice to everyone is to “find something you really love and do it to its fullest capacity. You should do whatever makes you happy. Another person isn’t going to be the thing that makes you happy. You get happiness from self-fulfillment,” said Pfau. “I fully believe you’re capable of anything and if you love something and you try real hard, cool things happen.”

Reflecting on the boost in fans he received from The Voice compared to many who first learned of him through concert festivals like Rock by the Sea (which he played in 2013, 2014, and 2015) and The Rock Boat (which he was invited to play in 2015, but had to turn down because it conflicted with his appearance on The Voice), Pfau said that the fans who are lasting “are the people you’ve had moments with.” He’s played house concerts and small clubs and has told intimate stories in those more intimate venues.

Through those experiences “we are connected,” said Pfau. “The connection only needs to happen one time because then any time you go back, if you actually connected with that person they are going to come see you again and they are going to tell other people about that. If you want to do [music] to this level you travel a lot, you have to hit the cities and see the people, kiss the babies, as they say.”

From NBC’s “The Voice” to house shows to perhaps an opportunity to get invited to play on The Rock Boat, Paul Pfau certainly wants to connect with his audience – and if it hasn’t happened already, take it from me – soon enough that could be you.